At the end of every month I review the blog posts and articles that I read during the month, and identify those that I have particularly enjoyed – for me this is a key part of curation. So here are 8 blog posts that I particularly enjoyed in April. If there is a theme to my selection this month, it is probably the fact that they (mostly)  included some great visuals, and I’ve reproduced some of them below together with some quotes from the posts themselves so you can get a flavour of what they were about.

“Of course we will need technology to support learning. Even more so than ever before. But, as noted earlier, the technology we need is a long stride away from that which most organisations currently have in place.” 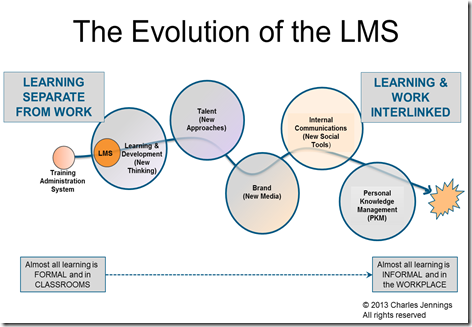 “In the Social Age, where technology should be enabling us by connecting us to our learning communities, we can’t afford to alienate the technology by pushing too much, or by pushing things that don’t need it!”

“There are two axes. The vertical one shows the rate of change of your L&D department, the horizontal one reflects how fast your organisation is changing. I’ve been talking a fair amount this year about change in L&D and whatever country I’ve been in, in whatever sector, this idea of the importance of relative change has struck a chord with the audience. People seem to recognise instantly where they belong.”

“Taxonomy based on pedagogy

To this end, it is important to define a taxonomy of MOOCs not from the institutional but the pedagogic perspective, by their learning functionality, not by their origins. So here’s a starting list of eight:
transferMOOCs
madeMOOCs
synchMOOCs
asynchMOOCs
adaptiveMOOCs
groupMOOCs
connectivistMOOCS
miniMOOCSs?

“When it comes to a lack of support for social and informal learning, the fact is most leaders (corporate and L&D alike) do not engage in formal learning themselves yet they support its use as the default, and often only, means to improve worker performance – Hypocrisy? “

“Imagine you’re a salesperson at a big global firm and you’re paid well into 6 figures. You’re at your office, about to call a client, and you want to research her first. Who’s she connected to? Where has she worked before? What’s she up to these days?

Now imagine your firm won’t let you do any of that research on their office computer (but it’s okay <wink wink> to use your own phone to do it). And imagine your firm spends millions on training but not a nickel on how you can effectively use the most powerful client research tools on the planet. That’s the state of social media at a lot of financial firms.

Many firms block it. (You can’t even read content published by your own firm.) Most don’t train anyone. Most aren’t sure of what to do next. And most have their heads firmly planted in the sand, pretending everything’s okay.”

“Leadership in networks does not come from above, as there is no top. To know the culture of the workplace, one must be the culture. Marinate in it and understand it. This cannot be done while trying to control the culture. Organizational resilience is strengthened when those in leadership roles let go of control.”

“Let’s take a college class as an example. Medina asks every new group of students this question: “Given a class of medium interest—not too boring and not too exciting—when do you start glancing at your watch, wondering when the class will be over?” The answer, without fail, is 10 minutes.”